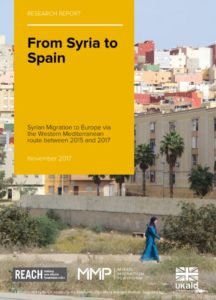 Research Report: From Syria to Spain – Syrian Migration to Europe via the Western Mediterranean Route Between 2015 -2017

The report was produced by REACH Initiative in the framework of the Mixed Migration Platform.

You can read the full report here: Research Report: From Syria to Spain November 2017

In 2017, Spain has seen a new surge in arrivals of refugees and other migrants to its shores. As of 31 October, the country recorded 21,304 irregular entries, twice as many as the same period in 2016. With this increase, the profile of arrivals has changed, as increasingly people from the Middle East – the majority of whom are Syrians – travel to Spain.

Though the Western Mediterranean route is now being considered as a new entry point into Europe, the evidence base for such claims remains limited. Little is known about the Syrians who migrate to Spain in particular. In this study, REACH, in the framework of the Mixed Migration Platform (MMP), seeks to increase understanding of the routes Syrians have taken to Spain between 2015 and 2017, why they chose these routes, and why they choose Spain as their entry point to Europe. Additionally, the study seeks to examine protection concerns of Syrians along the route to Spain in Algeria and Morocco, and to shed light on the future intentions of Syrians once they reach Spain.

The study is based on in-depth, semi-structured qualitative interviews with 60 Syrians who arrived in Spain between 2015 and 2017. Syrians who arrived in the country both irregularly and regularly were included in the study, with 45 and 15 respondents respectively. Data collection took place between 9 and 31 October in six locations across the country, which were selected on the basis of their hosting large populations of recently arrived Syrians. The six locations comprised the Spanish enclave of Melilla, Madrid, Valencia, Malaga, Seville and Cordoba.

Respondents who entered Spain legally arrived in the country through two legal pathways. First, respondents arrived through resettlement from Lebanon, Jordan or Turkey, where they had lived for several years prior to being resettled to Spain. Second, individuals who had travelled through the Eastern Mediterranean sea route to Greece were relocated from there to Spain through the EU emergency relocation scheme.

Of the respondents who arrived in Spain through resettlement, none had aimed to reach Spain or Europe when they left Syria, with their original intention being to settle in neighbouring countries such as Lebanon or Turkey. Among relocation candidates, one out of three respondents had left Syria with the intention of going to Europe.

Syrians only knew about relocation and resettlement programmes from official information channels, such as UNHCR or other humanitarian organisations. Resettlement candidates had been informed about this opportunity by UNHCR when they registered for other kinds of support. Relocation candidates received the information through official channels in the camps in which they were living in Greece. Only one respondent reported knowledge of legal pathways from personal connections, which were reportedly trusted more than humanitarian organisations.

Interviewed Syrians who reached Spain irregularly had followed two routes, both via North Africa. First, through Morocco and Algeria, where individuals had worked for several years prior to deciding to travel to Spain irregularly via the land border between Morocco and the Spanish enclave of Melilla. Second, transiting through Mauritania and Mali to Algeria and Morocco, a route which became more common when Algeria introduced visa requirements for Syrian nationals in spring 2015.

Changing visa regimes in the North African region influenced Syrians’ irregular routes to Spain. The introduction of visa requirements for Syrian nationals in Algeria in March 2015 led to an increase in the use of smugglers when crossing the border into Algeria. As a result, among respondents who could not afford to pay a smuggler to move through Algeria, travelling through the Saharan desert via Mali and Mauritania became more common as it was less expensive. Travelling through the desert also made the journey more dangerous.

Secondary factors influenced onward migration of Syrians residing in other countries in the Middle East and North Africa to Europe: most respondents reported that over time their living situation in transit became untenable. Reasons for the deterioration of living conditions included the inability to access residence permits in their country of choice, labour exploitation that was often tied to respondents’ irregular situation, and limited access to sustainable livelihoods and public services.

None of the Syrians interviewed would have travelled to Europe via Libya. All considered the central Mediterranean boat crossing to Italy too dangerous. The route via Spain was considered comparatively safe.

Protection risks for irregular migrants in Algeria and Marocco

Syrians living in Algeria or Morocco with no access to documentation for legal stay are exposed to labour exploitation and other forms of violence. One third of Syrians who had reached Spain irregularly had suffered labour exploitation in Algeria or Morocco. Respondents had reportedly worked very long hours for little money, worked under hazardous conditions or completed jobs without being paid at all.

All participants who had reached Spain irregularly had at some point of their journey engaged the services of a smuggler. While using a smuggler did not necessarily put individuals at risk, it did heighten their exposure to potential exploitation as smugglers were able to take advantage of respondents’ irregular situations.

Participants in this study did not presume that Spain was a transit country to other EU countries. Respondents who had reached Spain both irregularly and through legal pathways had little information on Spain as a destination. Reportedly, they were open to staying in the country, as they considered what they knew of Spain as similar to Syria in terms of culture and weather conditions. However, most raised concerns about their ability to find work in Spain, which was regarded as a precondition to stay and build a life in the country.

Satisfaction about the outcome of resettlement and relocation was mixed among respondents. Some reported that the information they had prior to departure and the expectations it raised did not match the experience of the country once they arrived.

KETHI (Research Centre for Gender Equality) has undertaken, in collaboration with Diotima – Centre for Research on Women’s Issues – the conduction of a nationwide research regarding the needs of the female refugees who reside in the temporary accommodation facilities all over Greece.

Especially for english speakers, we have prepared an english brief paper version of our nationwide research regarding the needs of the female refugees who reside in the temporary accommodation facilities all over Greece:
Brief Paper of Research on Gender-Based Violence in the Refugee Population (English)